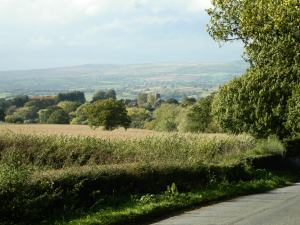 Once home to a small but significant manorial community, the disappearance of the vill of Carton in northeast Bayton serves as a potent reminder of the waves of demographic change experienced in the parish over the last millennium. Charting population changes provides an essential background to the parish’s medieval history, but is inevitably hampered by the lack of anything approaching modern census records; in the case of Bayton, we also lack the manorial court rolls which have proven so informative for demographic studies elsewhere in the West Midlands[1]. In reconstructing Bayton’s medieval population we are therefore heavily reliant on the evidence of taxation records written up at a number of fixed and unevenly-distributed dates throughout the 11th-16th centuries, none of which were ever meant to say much about population in the first place. Problematic as these sources are, they do let us make some population estimates at a series of fixed points, illuminating at least the broad contours of demographic change in the medieval parish.

The earliest of these fixed points is the 1086 Domesday survey, whose usefulness as a demographic ‘benchmark’ is well-established albeit much debated in the details[2]. In one of the more useful methodological surveys of English historical demography Goose and Hinde propose a series of multipliers to convert Domesday’s household listings into viable population estimates[3], using which the parish entries –divided in the survey between the manors of Bayton and Carton – can be transformed into estimates of 77-125 people at Bayton and 24-75 at Carton. These estimates clearly vary quite considerably in the details, but serve as eminently reasonable approximations of the highs and lows of where population is likely to have lain, suggesting a parish-wide total of some 101-200 people in the later 11th century.

Our next ‘fixed point’ for demographic estimates in the parish comes almost 200 years later in the form of another tax document – the c.1280 Worcestershire lay subsidy. The subsidy, levied at an uncertain rate[4], lists the names of some 27 taxpayers in Bayton and 8 in Carton whose contributions varied between 1s – 10s apiece. It is not unreasonable to assume that the taxpayers represent heads of households, although given the financial scale of their payments it would be unreasonable to assume that they represent all households; more likely many were exempted by poverty, while a few more might have conveniently disappeared when the tax assessors came to visit[5]. Following Dyer[6], the high estimate used here for the c.1280 lay subsidy assumes that those listed represent only 50% of households in their respective vills  – the remaining 50% exempt from or evading the survey – and that each household on average contained 5 people, producing high estimates of 270 people in Bayton and 80 in Carton. These figures are clearly quite optimistic, and can be complemented by lower estimates which assume that only 40% of households went untaxed and on average contained 4 people, suggesting totals of 180 residents in Bayton and 53 in Carton. In both the individual vills and the whole parish we can therefore identify a steady rate of population growth during the 200 years since the Domesday survey, mirroring broader trends at the national level[7].

Using the same principles we can make some population estimates from the 1332/3 lay subsidy. Levied at a fifteenth in rural areas like Bayton, the subsidy records 17 taxed individuals at Bayton and 6 at Carton, which using the same assumptions about evasion and household sizes adopted for the previous subsidy gives estimates of 113-170 at Bayton and 40-60 at Carton. This suggests a significant decline in settlement size over some c.50 years in the early 14th century – hardly surprising given the massive famines and livestock murrains sweeping Europe at the time.

An interlude – what about the plague?

By this point we have some reasonable estimates for Bayton’s population on the eve of the massive demographic crises of the mid-late 14th century. Assessing the impact of these crises at the local level usually involves comparing pre-plague figures with post-plague figures, the latter of which are commonly calculated from the 1377-81 poll taxes[8]. Here the record for Bayton hits a brick wall, as very few Worcestershire poll tax records have survived – none of which include the parish[9] – and alternative sources like manorial court rolls are absent or inconclusive. What does this mean for demographic history in this critical period?

As in most places in England, it’s hard to imagine that Bayton’s inhabitants escaped the plague years unscathed. On 21 July 1349 the parish received a new vicar, William de Emynghope, on the death of his predecessor, Thomas Aleyn[10] – a fate shared with almost half of Worcestershire’s parish clergy between July and December 1349, and one that whiffs quite strongly of the plague[11]. This alone, however, is not sufficient to establish local mortality rates, much less their overall impact on the local demographic pattern. Analogy – problematic as it is – seems to be the only source for estimating parish population at the end of the 14th century. This presents new problems, as studies which have assessed pre- and post-plague demographic change underline some quite substantial differences at the national and local levels; the most commonly cited national figure suggests that the English population approximately halved in size between c.1340-1400, although varying between counties, parishes and manors. Worcestershire certainly seems to have been one of the worse-hit counties in England, its maximum percentage mortality reaching 45-50% in 1349 alone[12].

Bearing this in mind, it seems fair to propose some very tenuous population estimates for Bayton and Carton c.1400, using the 1332/3 lay subsidy estimates as a benchmark. A low population estimate c.1400 assumes that the lower population estimate for 1332/3 was hit particularly hard in the mid-14th century, halving in size over c.50 years to around 57 individuals in Bayton and 20 in Carton. A more optimistic estimate assumes that the higher population estimate for 1332/3 got off slightly lighter, contracting by 40% by c.1400 to approximately 102 people in Bayton and 36 in Carton. The conditionality of these estimates cannot be stressed enough – after all, they are assumptions of what may have happened based on analogies from elsewhere in the country – but serve to provide a useful indication of the likely practical impact of demographic crisis on a small parish community in the mid-late 14th centuries.

The exchequer lay subsidy of 1524 provides a welcome opportunity to move towards some firmer ground for population estimates, but presents a new set of problems. Unlike previous incarnations Bayton and Carton were not taxed separately in the 1524 subsidy, instead being assessed together as a parish. The change coincides with the declining importance of Carton, whose manor was valued at only 26s 8d per year by 1400 – an absurdly low sum little more than its residents had contributed in tax alone c.120 years earlier[13]. The 1524 entry for Bayton parish lists 30 people contributing to the tax, although as ever it is unclear whether these are heads of households or taxable males aged 16 and over[14]. The high and low estimates given here have been calculated using the method outlined by Goose and Hinde[15], and imply a parish-wide population of 137-204 people.

Looking at the long term

The results of this survey have given us four reasonable population estimates at fixed dates – 1086, c.1280, 1332-3 and 1524 – and an additional (albeit more problematic) estimate c.1400. The scope of the estimates are limited – having an obviously uneven chronological distribution and telling us very little about sex ratios, birth rates and death rates – but do illustrate some of the broad contours of Bayton’s population history, largely mirroring the national pattern of steady growth in the 11th-13th centuries, a rapid decline by the 15th century and a slow resumption in growth by the early 16th century[16]. In absolute terms, the estimates for c.1280 reveal a parish population that had reached a peak never again experienced until the late 18th century.

Population estimates for the vills of Bayton and Carton, plus total parish population, at fixed dates.

Looking at the estimates in a general way it is interesting to note the differences in scale between the vills of Bayton and Carton, the latter consistently sustaining a far smaller population yet retaining enough significance to be taxed independently before the 16th century. This picture is consistent with a 1307 description of Carton as a hamlet[17], and raises questions about Habington’s description of it as ‘a place of great accompte in thys paryshe’ – which presumably alludes more to the prestige with which he held  its noble landholders than its medieval size or value. In hindsight the declining population at Carton seems to foreshadow its eventual desertion as much as its declining tax payments do[18]; the human impact of a sizeable fall in population in so small a vill would no doubt be felt more sorely than in its larger counterpart,  perhaps therefore providing an interesting counter-example to Dyer’s suggestion that woodland communities were hit less critically than those in champion landscapes by a declining population[19]. 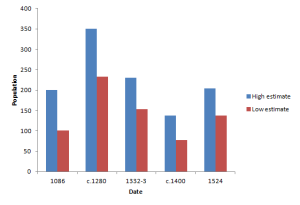 [5] Were it not for fleeing the parish after burning down the grange some 5 years earlier, presumably Thomas le Ku of Shakenhurst would have been one of those exempted from the subsidy through personal poverty – possessing no chattels at the time of his blacklisting. Worc. Eyre 1275, mem. 49a no. 1249

Faraday, M., ed. 2003. Worcestershire taxes in the 1520s: The military survey and forced loans of 1522-3 and the lay subsidy of 1524-7. Worcester: Worcestershire Historical Society

Hinde, A. 2003. England’s population: a history since the Domesday Survey. London: Hodder.